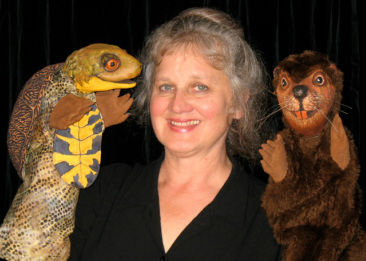 Debbie grew up in Lancaster NH in a region known as “The Great North Woods.”  There were no visiting school assembly programs and the only puppet Debbie had ever seen was “Bunny-Rabbit” on “Captain Kangaroo” (TV reception was very limited there in the 50s!) When she was ten she made a puppet! She had no idea how to go about it but made a papier mache clown that still sits in her studio today.

Since 1974, Debbie has been one half of the well-known “Gerwick Puppets” touring throughout New England at schools, libraries, museums and events such as First Night Boston.  She writes the scripts with partner Lenny Gerwick, and makes all the puppets.  She estimates that over the past thirty years she has made over two hundred puppets! The Gerwick Puppets have presented over 5,000 performances to over a million children! Productions include “Aladdin and the Magic Lamp,” “Pilgrim Adventure to America,” “Inside the Haunted House” "Adventures From Thornton W. Burgess"  and "Midwinter Magic" to name a few. (see gerwickpuppets.com)

Beside her work with “Gerwick,” Debbie designs, constructs and performs her own solo shows called “Small Shows for Small Groups of Small Children.” Titles include “The Three Pigs and Other Tales,” “A Woodland Cinderella” and “The Twig Family in the Oak Tree.”  These are especially popular in pre-schools, libraries and birthday parties.

For lower elementary grades is "Turtle's Wetland Quest" that reflects Debbie's growing interest in the environment and the value of being connected to the outdoors.

She has taught puppetry classes at Plymouth State University in NH and Northeastern University in Boston, and Worcester State College.  She created a set of eight puppets for the National Park Service to teach about Harriet Tubman and the Underground Railway. She has done professional voice work, such as playing numerous characters on the Verizon web-site: Superthinkers.com.

Debbie's environmental interests have continued to grow - taking her outside on trails more and more, downstream in her kayak and a growing interest in bird identification.  Her own experience of growing up in a rural setting , playing outdoors, building "forts" in the woods with her brothers, wading in brooks, gave her an ongoing sense of the unlimited joys of the outdoors.  Now, Debbie's mission is to try to do what she can to promote a love of nature in children.  It is something that can give great pleasure to everyone.  Nature is everywhere!